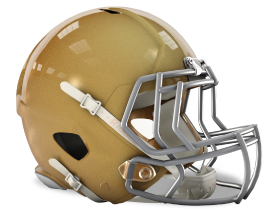 American College Football will return to Ireland for the fifth time in eleven years with the Aer Lingus College Football Classic between Notre Dame and Navy at Dublin’s Aviva Stadium on Saturday, August 26, 2023.

The Fighting Irish kick off their 2023 season against their longtime rivals, the Navy Midshipmen, in the 97th meeting of the longest uninterrupted intersectional rivalry in college football. The Irish and Midshipmen will be making their third visit to Ireland; in 1996 they met in Dublin at Croke Park for the first time with the Irish defeating Navy 54-27, and then again defeating Navy 50-10 at Aviva Stadium in 2012. It is expected that 35,000 fans will travel from the US and Europe to take in the full College Football event experience.

Aviva Stadium is located in Dublin, Ireland, with a capacity of 51,700 and 48,000 for American Football. It is built on the site of the former Lansdowne Road stadium, which was demolished in 2007, and where Boston College played in 1988. It is home to the Irish Rugby Football Union and the Republic of Ireland national football team. 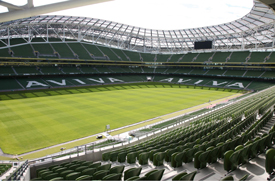